What are you “Golowan” about ?

A Brief History of Golowan

I am sure if you follow Cornish Culture you have heard of the Golowan Festival that is held to celebrate the mid Summer in Penzance.

If you don’t know Golowan – read on !

The Feast of St. John – with bonfires, flaming tar barrels and burning torches was widespread in Cornwall until the late 19th century. Penzance was one of the last towns to lose this tradition in the
1890s, as the perceived fire risk had made insurance premiums too expensive.

In 1991, the tradition was revived by Alverton School, members of Kneehigh Theatre, Penwith Peninsula Project and Penzance Town Council. From the one day of celebration – Mazey Day – and with the continuing support of Penzance Town Council, Golowan grew to revive the old traditions of the Feast of St. John, with the Golowan Band, Serpent Dances, the Quay Fair, Mock Mayor Election, greenery, banners and giant imagery on parade. Hand-made banners and flags adorn the town throughout the festival.

Mazey Eve each year sees the election of the Mock Mayor of the Quay and, after a spectacular fireworks display, the appearance of Penglaz, Penzance’s ‘Obby ‘Oss, accompanied by the Golowan Band.

Mazey Day, launched each year by the Mayor of Penzance and the Mock Mayor of the Quay, is the centrepiece of the festival, in which artists, schools and other community groups fill the streets with music and giant sculptures in a series of parades. Tens of thousands of people line the main street of Penzance, Market Jew Street, which becomes a huge market place for the day, with traders selling all manner of goods as well as food from all around the world to delight the taste buds. 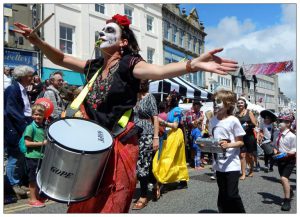 FREE Holiday with Confidence Guarantee Cover on ALL 2021 bookings